Tips from the experts... with Reload Swiss powders.

I've undertaken extensive load work-ups for RS40, RS50 and RS52 in a number of cartridges, but primarily .223 Rem with heavy bullets (80-90gn) and .308 Win with 155 to 195gn projectiles. Results have been very encouraging producing high velocities, small extreme spreads and small groups. This has translated to excellent 1,000 yard FTR performance in .308 Win plus some limited testing with RS52 at 1,112 yards at Blair Atholl, and was undoubtedly a factor in helping me take the 2014 Scottish Long-Range FTR title at Blair Atholl in June alongside helping Scotland take first FTR place in the 2014 Celtic Challenge teams matches.

So far, I have seen no signs of any tendency for sudden pressure spikes as charge weights increase, and a box of 308 Win rounds loaded with RS52 was left in direct sunlight in a car for several hours until it was hot to the touch to check on temperature sensitivity. No pressure problems appeared. I intend to test slower burning grades - RS62 and RS70 - in 6.5 and 7mm cartridges over 2014/15 and fully expect performance to come up to already high expectations.

An important factor for many precision and long-range shooters is lot to lot consistency and uninterrupted supply. It's too early to comment on the former, but initial signs are good. The latter has become a crucial issue for many large scale users and a new European manufactured high-performance product range is an absolute boon given recent adverse developments in propellant supply and availability.

I have done reloading testing with Reloader Swiss powder for several customers,  mainly using the RS 40 & RS 52 powders for 308 win.  This has produced extremely high velocities for low pressures and extremely low ES and SD which has then gone on to work at 1000 yards, producing extremely tight groups and high scores.

I still have plenty of experimenting to do with other calibre’s, but confident they will work equally as well… 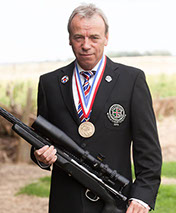 I have used RS40 for most of this seasons F Class National league shooting. I find it perfect for my .308 load with HBC 155gn bullets, producing high speeds and spreads of 4ES & 2SD. My elevation at 1000yds averages below 1/2 MOA. I have not been able to achieve this with any other powder on the market. My quote is - 'High speed, low pressure'
Please note: This is not a  recommended load for a factory rifle. My rifles are built with my spec. by Mik Maksimovic of Dolphin Gun Company. 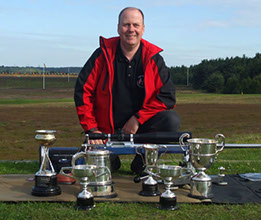 Reload Swiss powders are new on the market and are rapidly turning out to be a very versatile asset to UK shooters.﷯
The wide range of powders cover every application a shooter could wish for. I mainly shoot F class but also hunt and I'm finding the powders to be excellent in both roles.

RS52 is now my go to powder when loading a .308 and produces fine accuracy with enhanced velocities, with low pressures in both hunting and target loads. It is a universal powder and very similar to Varget in its applications, I've had fine results using it in my 6BR and 6.5x47 also.

As a Match rifle shooter RS60 is my first choice powder excelling with heavy bullets in the .308. I've also used it to great effect in my .284 F class open rifle with 180 grain bullets. Winning the Imperial Grand Aggregate 2 years running and the Queens prize in 2012 using it.

RS62 and RS70 are showing huge promise in F open rifles producing fine ballistics for low pressures in .284 and the 7mm magnums.

A fine range of powders which no doubt will gain many podium places over the coming years.